This first obituary of J.W.Lovegrove was published in Tailor & Cutter and Women’s Wear, January 3rd 1941.

Passing of a Man Who Loved His Craft

About twenty years ago a London evening paper had the following paragraphs with the Caeylyean heading: “The Tailor Philosopher”:-

“Mr Habibullah Lovegrove, who lectured for over an hour on Sunday to the London Islam Society on the Teachings of Islam, is one of London’s most romantic figures. In ordinary times he is Mr J. W. Lovegrove, a Cork Street tailor, whose clientèle, drawn from military and diplomatic circles, is one of the most distinguished in the West End.”

“Tall and massively built, with finely chiselled features and white beard, he presents a benign and imposing picture that is characteristic of his temperament. Full of anecdotes, wittily and neatly uttered, a writer of considerable ability on a variety of subjects, and a keen student of psychology. “

On reading this notice I called and congratulated Mr. Lovegrove, for one should no more avoid old friends who have become famous than those in adversity. He was one of the big figures of the tailoring trade; one of the best-known members of the craft in the West End.

Mr. Lovegrove, “Jimmie” to his friends, had cut in some of the best firms in the West End, including the historic house of Hammond, where, for many years, he was a coat cutter. Later, when the motor car became fashionable, he went into partnership with a Mr. Browning in Piccadilly. There is little doubt that he revelled in tackling virgin soil – designing garments for the new pastime which was to drive the horse from the streets. 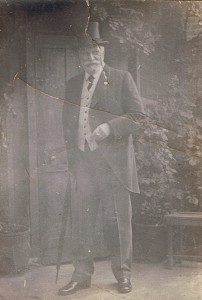 For nearly half a century J.W.L. had been interested in trade societies and was a member of several. He was a member of the West End Society for a long time. Soon after the war the London Alliance made him President; during recent years he has been Honorary President. He was elected the first President of the ill-fated Cutters’ Union.

The reason why he became a dominating figure in trade circles was not due to the situations he had held, but through force of personality. Blessed with a handsome presence, dowered with a big stock of confidence, one could not imagine him being embarrassed, no matter what the conditions. If anyone, no matter how exalted his position, ever succeeded in overawing J. W. Lovegrove, I should like to know his name.

In all his dealings, whether in business matters or purely technical ones, he was daring and original. In technical subjects, especially, he cared nothing for the precedent or tradition; if he thought a thing right he would do it. It is a thousand to one that if you spoke to him on this point he would have said: “I make precedents.”

In his work he loved to encompass things that had never been managed before. He welcome fresh ideas with open arms. Experiment with him was a passion. I verily believe that when he cut his own clothes it was not so much to cover his body as to ease his mind; thus he would test a theory, embody a pet idea, or kill an unsound argument.

His keen and restless brain would not allow him to get into a rut. To indulge, for once in a way, in a bit of that verbal play which he himself enjoyed, Mr Lovegrove did not love a groove.

He was an old student of the “Tailor & Cutter” school, when it was located in Drury Lane. He remained faithful through all the intervening years to the system taught and the direct measurements advocated.

Many years ago, while he was at Hammonds, I remember his telling me that he had taught those measures to their travelers, and found this a help in his work. He contended that, with these computations, you could turn up an old order book and visualise a customer at once.

“These check measures,” he once told me, “have served me in good stead.” A characteristically expressed dictum was: “A measure taken round the chest, without check measures, is like measuring round a barrel for the bunghole.” All this talk of the best methods and measures may strike many as beside the mark to-day. In their time they have caused unceasing conflict and frayed tempers.

Loving experiment, J.W.L. found this system a fine basis for any and every departure, because it proved flexible, adaptable, and yet simple to work. The essence of perfection in all the arts is simplicity.

One thing I admired about him was his pride in his craft. I have been with him in all sorts of distinguished company – due to his attachment to Islam. But he never tried to hide his calling. He was a tailor and unashamed; but he was something more than a tailor.

A good speaker, his activities were various. He could talk on technical topics, or discuss the politics of the trade. He lectured, as seen here, on Islam. He was an authority on allotments – and many other things.

In everything he took up Mr. Lovegrove was constitutionally incapable of taking a back seat; his enthusiasm and confidence precluded it. But beneath the good humour, underneath the easy manner and ready jest, there was deeper spiritual side familiar to those who knew him well.

Until three or four years ago he had large and handsome premises in Cork Street, close to Savile Row and Bond Street. Here there was every convenience for doing a large trade; and this he seemed to be accomplishing. But he started with too little capital and was hampered until the end.

He specialised in beautiful cloths, those glorious stuffs of good substance, fine colour, and a delight to the eye; cloths to make one’s mouth water – cloths fit for a king.

His cutting-room, lit by a skylight, was splendidly untidy : there were cloth, trimmings, button boxes, shears, squares, tapes, garments hanging up, bastes about. The untidiness was that of work. Sometimes I was called, at a time when everyone was complaining of slackness, No.4 Cork Street was a hive of industry.

With such a fine shop in the heart of the West End, with his versatile talent, courage, and optimism, James Lovegrove should have been successful. But then, success has different facets. Some count it by coin. Others by achievements. Slightly to alter Addison’s oft-quoted words – If he did not command success, he surely deserved it.

Here is another obituary, source unkown.

The sudden death of Mr. James William Lovegrove, at 22, Longlands-road, Sidcup, on December 19, at the age of 73, will be deeply regretted by his large circle of frends.

Mr Lovegrove was born at Grove, near Wantage, in Berkshire, on July 8, 1867, and followed his father’s business as a tailor, holding his first post at the age of 19, with Messrs. Scatcliffe, of Worksop. There, in his spare time, he developed his interest in political affairs, and became the secretary of the Conservative Association. There, too, he met his wife. He began high tailoring career as a cutter in the West End, where his personal charm quickly brought him friends.

His tall handsome figure in grey morning coat, topper, and gloves, made him during the ’90’s and the early part of this century one of the best-known debonair personalities of the West End. He was a character, and nothing pleased his customers better than to drop into his Cork-street shop for a talk. It became almost a rendezvous, and as at one time he was dressing seven of the crowned heads of Europe and most of the nobility and politicians as well, these meetings were never dull! 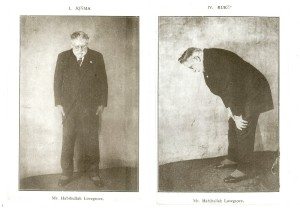 All these talks and discussions naturally led to much philosophical thinking, and so it was that Mr. Lovegrove became a student of religion. He read his Bible from beginning to end, and the Quran, and the sayings of Zarathustra, Confucius, and Buddha, attended and addressed meetings on Theosophy, Christian Science, and Spiritualism; but it was the simplicity of the teachings of Mohamed that maded the greatest appeal to his nature, and so in 1909 he embraced Islam, and later became vice-president and secretary fo the British Muslim Society.

Thus to his many British friends were added, those of Arabia, the Middle East, and India, and from these distant lands many made special journeys to meet and hear the wisdom of the “Great White Chief.” His book, “What is Islam?” is regarded as one of the simple text books on the subject.

With all these activities Mr. Lovegrove remained a live member of his own trade. He was president of the West End Tailors’ Society, hon. president of the London Alliance of Master and Foreman Tailors, first president of the Cutters’ Union, lecturer, demonstrator and chairman at the societies’ dinners. He last political interest was in 1914, when he called together and inaugurated the Allotment-holders’ Association of Wandsworth Common, of which he became the Hon. Secretary, and in this capacity he inspired and drafted the Allotment Act, about whcih we hear so much to-day. On the simplicity and directness of this Bill he was complimented by Sir Kingsley Wood, who himself conducted him in the House to hear it read and made law.

His hobby was photography, and he was at one time president of a branch of the Amateur Photographic Association. He also did a little Press photography and journalism.

Mr. Lovegrove retired in 1935, and also left Wandsworth Common , where he had resided for nearly 40 years, to live in Sidcup. Here he made many friends, and developed his magnetic powers of healing, but the the work of writing which he had aimed to accomplish was prevented by the stroke from which he suffered furing the last years of his life and which in the end caused his death.
His niece, Mrs. Mary Thomas, writes:

“We who knew him and loved him, because to know him was to love him, will lose a sincere friend and adviser. He listened to everyone. No one was too old or too young. The aged and the children alike sought his help. His wisdom and magnetic powers have healed many a heart and headache. He was a devout Muslim, and said his prayers regularly, devotting much thought and wisdom to the subject, most of which he handed on in letters to his many friends. He leaves a widow and nine children (six sons and three daughters). Four of the sons served in the last war. He was also the adoring grandpa of sixteen grand-children, and the beloved uncle of many nephews and nieces, all of whom regarded him with equal affection.”